Bagyi Aung Soe
at 11:08 AM No comments: Links to this post

U WIN TIN SPEAKS OUT THE TRUTH

FAREWELL TO U WIN TIN, NO. 1 OPPOSITION LEADER OF BURMA 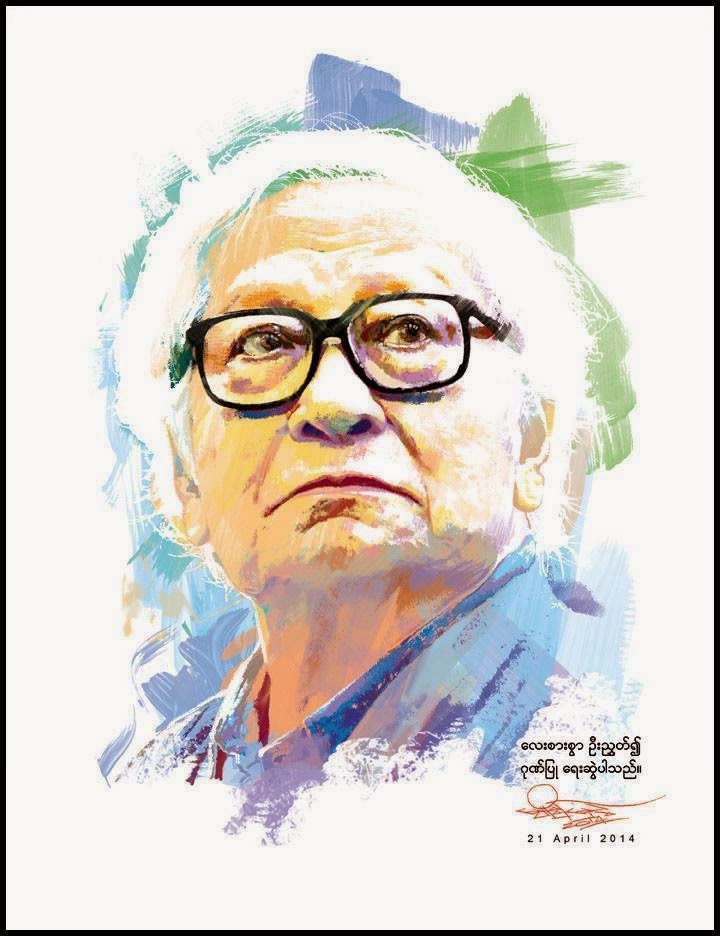 Farewell to U Win Tin who never bow down to dictators

It was over thirty years ago when I first met U Win Tin in the editorial room of Working People's Daily (Burmese language).  Then I was working at Research and Reference Division of News Agency Burma (External news service).   The small department where I worked was very close to editorial room of WPD.
I rushed into the editorial room one afternoon as I heard noises of commotion that came out from the street in front of the building where we were working.  Once inside the room I saw some editors from WPD, Managing Director of the News and Periodicals Corporation and Chief Editor of WPD. They were watching the protesting people marching on Theinbyu Street (formerly Stockgate Road). When I looked through the window of the editorial room down to the street there was a large group of people who were protesting against the government shouting slogans.  They were workers from a certain factory which I do not remember the name of the factory.  There right in the room I came across U Win Tin.  He was standing beside the MD of NPC.  Then U Win Tin was in Rangoon to attend an emergency meeting of chief editors. At the time there were sporadic workers demonstration in Rangoon and the authorities afraid the protest might spread over elsewhere in the country.  The chief editors of the newspapers concerned must take the order of the Ministry of Information regarding the way they handle their newspapers in time of workers crisis.

U Win Tin was chief editor of Hanthawaddy Daily, a prestigious paper from Mandalay, second largest city of Burma. Though most editors and chief editors were criticizing the workers strike in favor of the government U Win Tin was silent and just staring at the  protesting people on the street.  I could read from his face that he was not feeling good at the time. He seemed to be sympathized to the workers on the street.  I secretly glanced at his face as I wanted to find out how he feel  at that moment.

Previously, I learned about his on going secret anti-government activities and admired him because of his  dutiful act of a journalist who loves freedom of press. He and his colleague were holding a talk on every weekends at Hanthawaddy newspaper house in Mandalay.  Their purpose to gather weekly was to discuss and criticize the government and its one-Party ruling system which was misleading the people and country.

Then, I was also feeling something pain in my heart as I was on the side of the people who were suffered from social and economic difficulties due to the ruling system of the socialist government. Five years before I joint the NPC I was detained for one and a half years as I was participated in the student movement against the government.  At that time we burnt the effigy of General Ne Win in the campus of the Rangoon Arts and Science University. I was released from the notorious Insein Prison on an amnesty program issued by the government.  I did not went back to university for my study because I need to appeal the authorities concerned for my readmission to the school.  Instead I sought for an employment to support my family members. Finally, I secure a job with the help of my elder brother's assistance.  I landed on a research job at News Agency Burma (external service).

Five years later, U Win Tin was ousted from Hanthawaddy and his newspaper was closed down by the authorities as they found out his anti-government movements. Then I was Assistant Editor with the Guardian Daily. When I heard the sad news I felt sorry for U Win Tin to whom I admired much for his courage and his stand.   We loss a good journalist who would lead us in the movement of Press freedom.

In 1988 when the entire country participated in protest against the socialist government and demanded Ne Win step down from power we formed a newspaper coordination committee and join the people who took to streets.  Editor U Soe Thein (deceased),  Editor U Sein Hla Oo and Editor U Ohn Kyaing (now information chief of NLD) of Botataung Daily; Khin Maung Aye of Working People's Daily (English ); Danial Aung (now resided in Australia), Tin Tun Aung (now resided in L.A.), Khin Nwe Aye (Arizona, USA) and Thiha Saw (founder of Myanmar Freedom Daily) of News Agency Burma (External); U Than Aung of Myanma Alin Daily participated in the strike.  For 22 days our newspaper which was once controlled by the government went on strike and once again enjoyed the freedom of Press.  During 8888 uprising period I was responsible to publish the Guardian Daily as a free paper.  Our freedom last only 22 days and the military regime took over power again after General Ne Win officially announced his resignation.

The first reporter who became an exile journalist in the Socialist era was Editor U Soe Min.  He fled the country and took refuge in Thailand before he applied for a refugee status at the UNHCR.  Later, he was approved by the UNHCR for his resettlement in Federal Republic of Germany.  Journalist Soe Min passed away in Germany 25 years ago. Before he fled the country he had written weekly short articles under the name of Reporter Zanya in the Working People's daily (Burmese).  His sarcastic articles about the socialist system were welcome by the readers.

I fled Burma in 2006 when my life was threatened by the military intelligence as I gave assistance to a journalist from the United States when he came to Burma in disguise of a tourist.  He had met Min Ko Naing ( now 8888 Generation and Open Society leader) with my arrangement. I lived a life of refugee in Cambodia  for ten months before I was approved by the States Department to resettle in the U.S. thanks to CPJ (Committee to Protect Journalists), UNHCR (Cambodia) that helped me to get to the America safe and sound.

U Win Tin co-founded the National League for Democracy which later became the opposition party that had incessantly criticized against the military regime of Burma.  He was charged with instigating the people to rise up against the government and sentenced to 20 years and was released after serving time for 19 years.  He won the Golden Globe Pen of Freedom in 2001 and continue his movement to restore peace and democracy in Burma. With the physical and mental tortures he had received during his prison life his health was not in a good shape after he was released from the prison.  Though he was suffering from heart, kidney among other diseases his will to keep on fighting the dictatorship and military regime still going strong until he gave up everything when his ailment does not allow him to survive.  He passed away on 22 April 2014 with kidney failure at the age of 84.  The hero dies but his name still live and his iron will inspire young freedom fighters to carry on his duty, to annihilate dictatorship and restore peace and democracy in Burma. This is a great loss to our country for having loss a great journalist and leader of freedom fighters who is waging an unfinished war with the military regime as well as the dictator.

Hail to the Myanmar Freedom Daily! 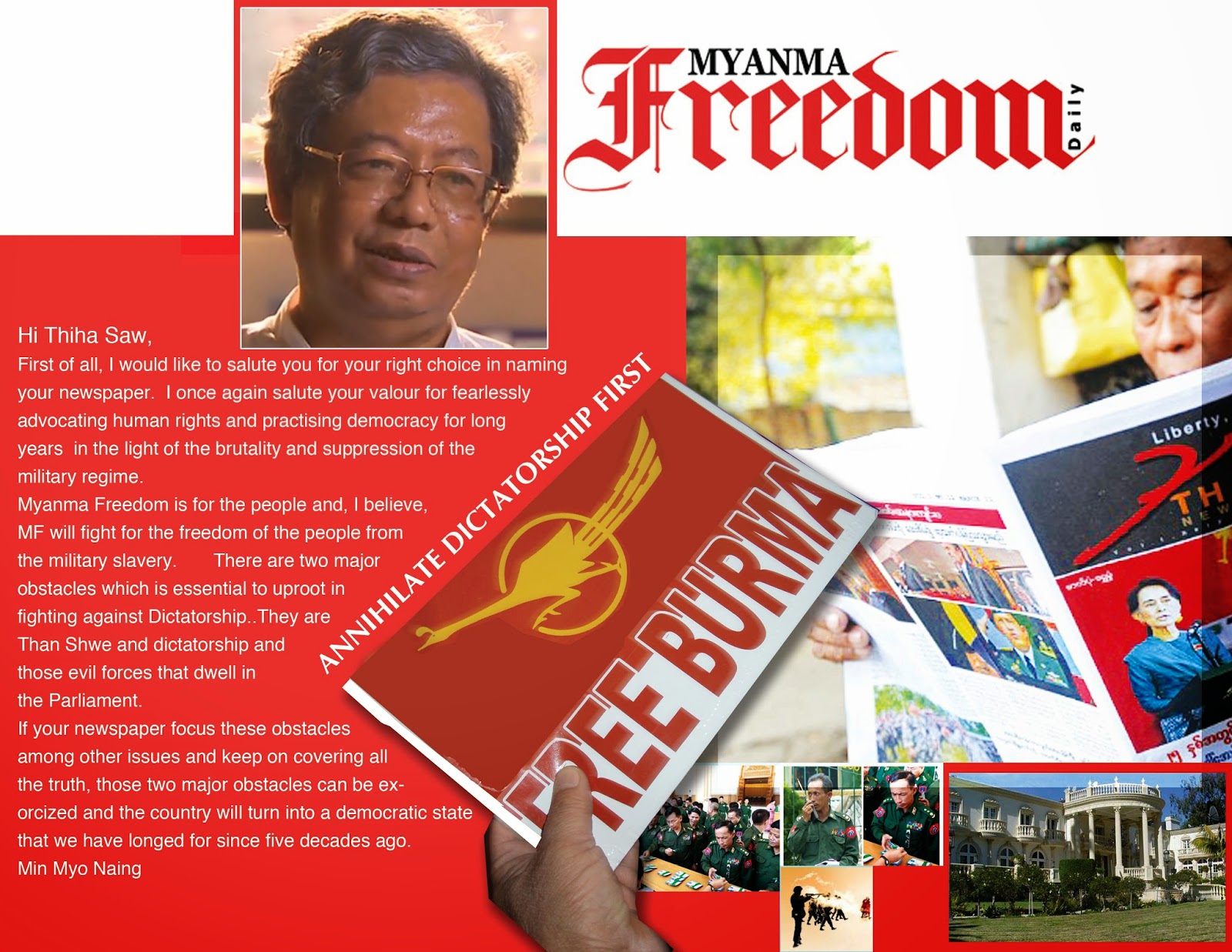 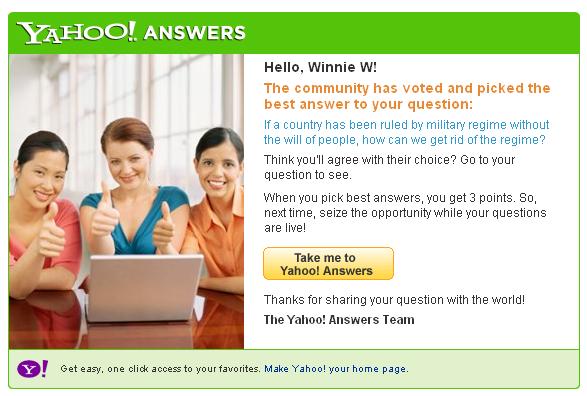 First, through a concerted, non-violent protest by all citizens of the country at home and international fora. If it is responded by repression and harsher measures, then, through an armed revolution. Such moves are sure to be supported by all democratic and peace loving countries of the world. (modest)

(The question for above answer was asked by Min Myo Naing using another name in June of 2006.)

Maung Maung Kyaw Win
An exiled journalist from Burma, I have taken refuge in the United States with my family thanks to CPJ in New York, UNHCR (Cambodia) and the States Department. I was detained for one and a half year in 1969 for burning effigy of the late dictator Ne Win in the Rangoon University campus during SEA Games Strike. I was also actively participated in 8888 nationwide uprising by taking charge in publishing The Guardian Daily as independent newspaper for 22 days before I resigned from the newspaper as Assistant Editor in September,1988. Fortunately, I was escaped from arresting by the military regime. In 1990, I left for Bangkok where I had an assignment to translate the "Outrage: Burma's Struggle for Democracy". The book was originally written by Bertil Lintner, a Swedish journalist. I fled my country in December 2005 after my life was threatened by the military intelligence service for involving in political movements and had given assistance to foreign journalists who came to Burma. I am still active with the movement for restoring democracy in Burma.